Fact:
Out of all the components that make up a trawl the twine contributes up to 60% of the total drag.

When towing, there are small changes such as reducing speed which can lower fuel consumption but generally this will result in reduced catch and hence earnings.

To maintain catch levels but reduce fuel costs, the skipper of a trawler can only realistically do one of the following:

Either of these two things gives the skipper the option of either towing at the same speed and saving fuel or, towing faster and consuming the same amount of fuel but potentially catching more fish.

There are a number of other changes which may have a marginal effect but reducing gear drag is the one which will probably have the most significant effect in the short term.

In calm weather the vast majority of fuel is consumed to overcome the drag of the trawl gear and only a very small proportion to propel the vessel (perhaps 10-20%). This means that gear drag is the main element which needs to be reduced to save fuel.

Bringing down the drag of a trawl can be achieved by reducing its physical size. This in turn decreases parameters such as wingend spread and headline height. It also allows a reduction in the twine surface area of netting. This also has helps ground friction by permitting the use of smaller doors and ground-gear components.

However this choice may not be cost effective as fishing efficiency has been compromised and the exercise may negate any fuel savings that may have been achieved.

Constructing a trawl with Dyneema is of course more expensive, but as with any other investment it requires some thought. The return time on money spent is spread over a  period. One of Crimond’s Dyneema customers renewed his trawl after eight years.

Trials have shown  that using Dyneema netting the drag can be reduced by xx% and this coupled by the use of more efficient doors can be increased even more.

Braided Dyneema netting is used successfully in large Pelagic nets and also in Bottom trawls for 300 HP up to 10,000 HP trawlers. With Dyneema netting these trawls all reduced drag greatly and fishing improved.

Dyneema high performance fiber
has proved to be an exiting new netting material. Abrasion resistance is better than Nylon. New Dyneema SK 75 has a tensile-strength 4 times that of Nylon! Shock absorption capacity is amazing. Dyneema netting is far less sensitive to sharp surfaces, hence the use in bullet-proof vests.

Dyneema – The World’s Strongest Fibre:
Dyneema opened up completely new possibilities. Fibres made of this synthetic high-tech material are ten times more resistant than equally thick fibres made of steel. Dyneema is used not only for bullet-proof jackets but also for nets and ropes.  With a thickness of just 1.1 millimetres Dyneema achieves the same resistance as a three-millimetre thick net rope made of PE. Dyneema nets are thus lighter, smaller trawl doors are possible, engine power can be reduced, less fuel is needed. The new material thus contributes towards greater profitability in the fishing sector. 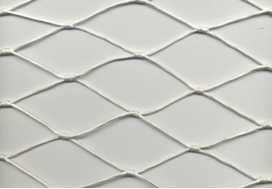 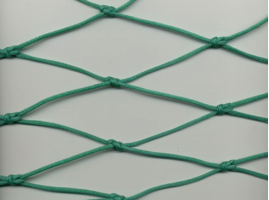